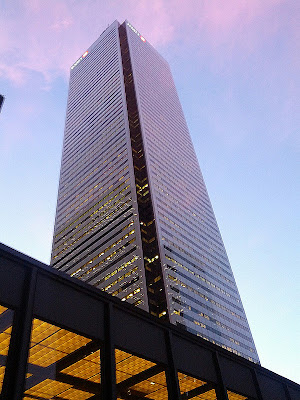 Took this picture from the open plaza in front of the TD Bank Towers at King and Bay, looking up to the First Canadian Place Tower.

Total floor space of the tower is 2.7 million sqaure feet. It was developed by Olympia and York, and is currently owned and managed by Brookfield Properties, itself formerly a part of the global conglomerate BRASCAN.

The tower has recently undergone a multi-million dollar renovation to replace the marble facade, with an easier maintenance glass cladding.  The old marble had become stained and weather wore, and the new cladding does look much, much better. At least in my opinion. In addition the interiors have also been renovated to make it a much more inviting office space in the heart of the financial district.


Getting a Mortgage and Mortgage Insurance through BMO Insurance for financing a loan to purchase at FIVE Condos is actually a relatively easy process, and new rules from the federal government has required that company include new regulations, which have made the home loan and mortgage process a bit more difficult. Those changes at BMO Insurance include shortening the amortization period for which the loan can be held by the consumer, and the degree to which the property is financed by the mortgage. They have also increased deposit requirements to lift the loan insurance amount. Mortgage insurance from BMO Insurance is actually one of the major financing costs on home loans.
Posted by Scott B at 09:38