New York City, the worldwide leader in Skyscrapers, Skylines and Skyscraper Construction. I'll grant that New York has far more history than Toronto, and is much better served by transit than is Toronto.

I often ask myself, what if any is the difference between the construction which is ongoing right now in Toronto and that which is happening in New York City, the worldwide leader in Skyscrapers, Skylines and Skyscraper Construction. I'll grant that New York has far more history than Toronto, and is much better served by transit than is Toronto. However, Toronto is a city on the rise, New York (Manhattan) is a city already there and secure in it's place. What can change this balance, what can bring Toronto to the same level as New York City.

Currently New York is building skyscrapers, however not at the same torid pace at which Toronto is constructing highrise towers. In fact New York is building it's tallest towers, the New World Trade Center, and other towers it has underway or planned are have a certain high quality that we here in Toronto have yet to attain. Toronto has some great towers, no doubt, our most beloved skyscraper right now, that can go toe to toe with anything in New York City, is the Scotiaplaza (Scotia Plaza) Tower. However, beyond that much in Toronto is just average fair. Toronto was never supposed to be a world beating, worldwide overachieving city. We were just supposed to be a provincial farming town and a far flung military outpost for British Soliders, and nothing more. 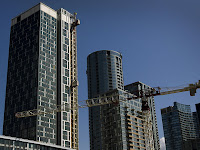 So, now Toronto is flying skywards with buildings that are challenging world greats, like New York, Chicago, London, and Hong Kong, how will we do this, what do we need to build to ensure our architectural supremacy, when we are basically starting with nothing. Firstly what we need to do is fill all those suburban home style tracks in our downtown core, of course, there are not that many to fill, but those that remain on the fringes of downtown are prime target for architectural masterful infill projects, like 12 degrees, and Victory, and Thompson Hotel and condos. This will work well on the fringes, as we move into downtown, 12 to 20 floor older buildings, must be demolished, and razed, and replaced with soaring towers of architectural significance. An example of this would be what is currently happening with Casa 2 on the northern downtown (Yorkville) where an old 10 or 11 floor building is being replaced with a 62 floor modern glass and steel tower. Other proposals like that on King West with Mirvish and Gerhry's Projectcore development will change every aspect of life on King West.

Since Toronto is building at a pace far exceeding New York, for the time being, the recent past, and the foreseeable future, we must use this as a launching pad for not just developments, but great bold and innovative development that has impact not just here but around the world. Let our technical and artistic skill be seen around the  world, and let them come here to marvel at our engineering genius. Yes, at the same time we will require mass filling of our downtown with towers, and by proxy with people to make our downtown core exciting and as exciting as that of New York City.
Posted by Scott B at 08:53